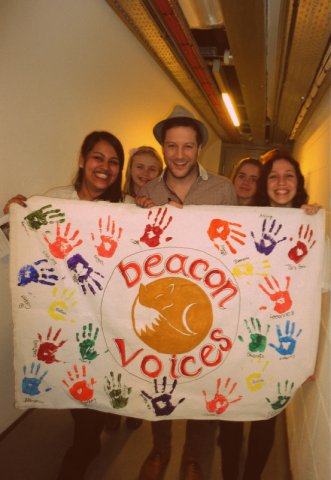 Tonight Beacon Voices sang at Wembley Arena!! We were taking part in an event called Voice in a Million, which is a mass schools concert. Over 5000 children and young people took part, but Beacon Voices was one of the few choirs chosen to sing some songs on stage! They sang Happy (Pharrell Williams), I Gotta Feelin' (Black Eyed Peas), Jai Ho (A.R. Rahman feat. Pussycat Dolls) and Wherever I Go (Miley Cyrus, from Hannah Montana the movie).

We had an awesome night singing, dancing and even meeting Matt Cardle! Our groupies came in the form of carers, social workers, other fabulous CYPS staff, Walter McCulloch and even Lesley Hagger! :) Thank you so much for supporting us, it meant a lot!

The photos are available to view here.