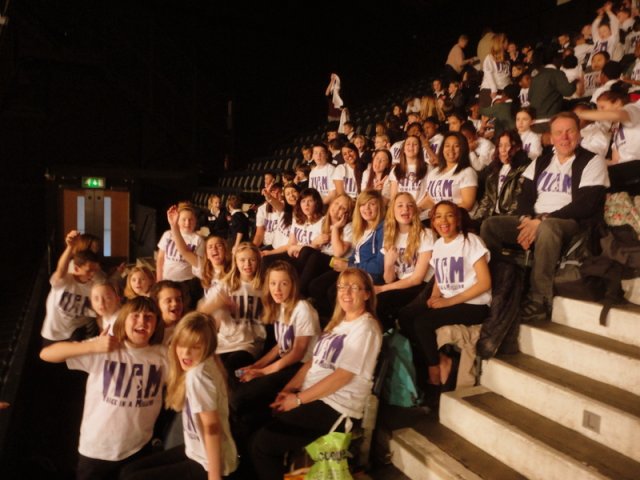 Leicestershire's Children in Care Choir is called 'Beacon Voices'. This is us at Wembley Arena in March 2014 for the VIAM concert.

"It's great making friends with other people from different places in Leicestershire and getting to do experiences you wouldn't normally do, like singing in Wembley and Sheffield City Hall." Rosie, 14

We meet every two weeks at the RA Centre, Embrace Arts, Leicester. As well as learning new songs, we learn singing techniques and have fun together.

"It allows you to develop skills and things you're passionate about. Like building your confidence and working as part of a team, as well as improving our singing skills." Ashleigh and Nicola, 17 & 16

"We get to use our talent to the fullest and enjoy ourselves". Ellie-Mae, 9

In March 2015 we performed 'Keep Holding On' in Sheffield City Hall. We also performed at Wembley Arena in March 2014 (though not on our own!) and have sung at lots of other big events like the Celebration of Achievement Awards or Unheard Voices.

"It's good coz everyone sings and you can sing on your own if you want." Carla, 14

We're really friendly, lots of the members didn't know anyone in choir before they joined!

"It's good meeting new people and having fun and time out of your foster placement. And we sometimes get to choose our own music!" Alison, 17

We're building up quite a repetoire, here's what we've sung and where:

Somewhere Only We Know (Keane)

Keep Holding On (Avril Lavigne) - as a Beacon Voices only performance.

With massed choir, too many to mention, but included:

Count on Me (Bruno Mars)

What a Wonderful World (Louis Armstrong)

Voice in a Million, Wembley Arena

Too many to mention, but on stage ...

Whereever I go (Miley Cyrus) - this was also sung for the Leicester Mercury and featured on their website.

Wherever I go (Miley Cyrus)

When I Grow Up (Tim Minchin, RSC's Matilda)

Away in a Manger

Santa Claus is Coming to Town

also sang these at a local Nursing Home.

Several members were interviewed about the choir and our Christmas performances and we sang 'Silent Night' live on air.

Something inside so Strong (Labi Siffre)

Lean on Me (Bill Withers)

Something inside so Strong (Labi Siffre)

Something inside so Strong

If you would like to join you need to go through a really hard audition process, like the X Factor... only joking! As long as you're in care in Leicestershire or a care leaver you can join, it doesn't matter if you think you can sing well or not - singing is fun!

Beacon Voices are going to be leading a workshop for young people and older people, as part of an event at Brockington College. We'll all learn a song together and then perform it a the end of the event.

We will probably be singing at this event at County Hall next month. Watch this space!